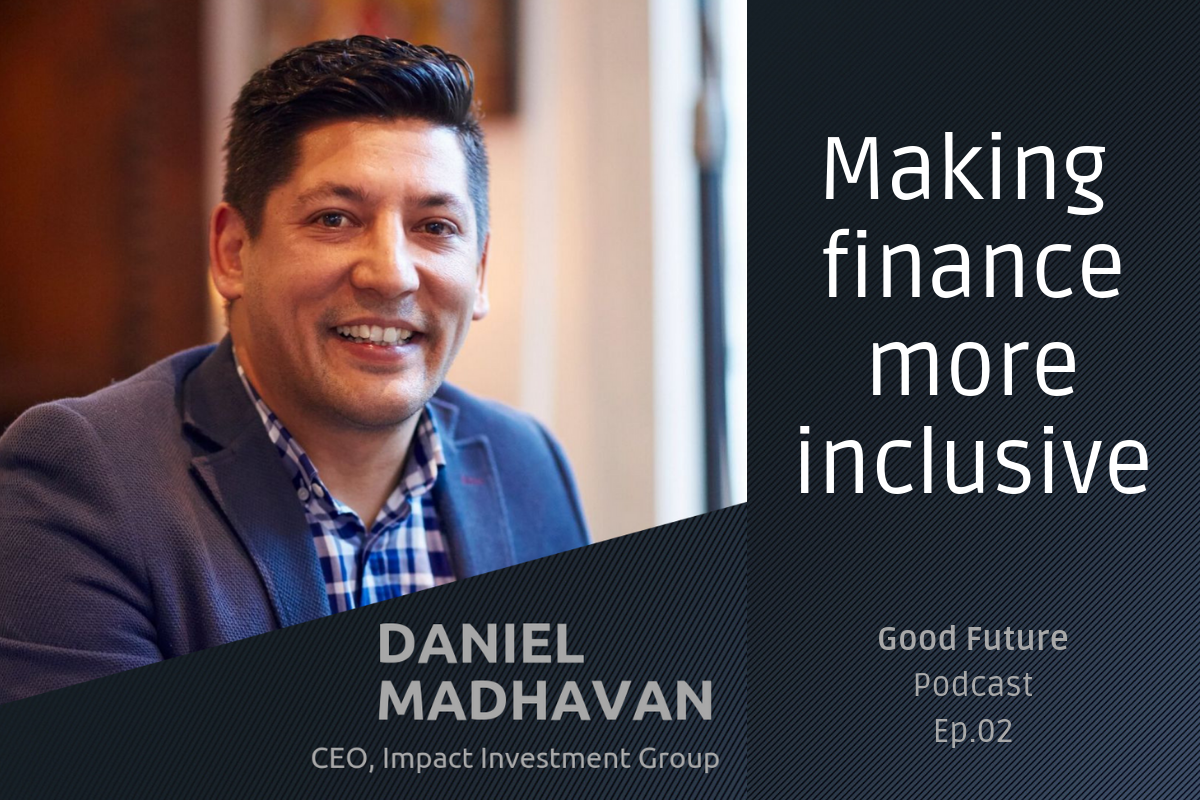 It’s a noble goal, but it’s also pragmatic. He’s the CEO of the Impact Investment Group (IIG) and getting more people on-board, and understanding their mission, is only going to help the bottom line. And in the process it’ll also help drive more positive impact.

Daniel was a top executive at JB Were, but then he left. Many would’ve thought he was crazy, but others took it as a sign, that there was a shift happening in the world of investing.

“For me it’s hard to explore something new, when you’re attached to something already.”

He’d left JB Were without a plan. He wasn’t shopping around for his next role or haggling for a raise. Instead he’d set himself adrift to let the currents push him towards his next challenge.

“I needed six months to think very differently about the world and decompress. Giving myself the space to do that, just creates an openness that I wouldn’t have got otherwise.”

The shift happened as he came across a whole mix of smart, young social entrepreneurs that were building businesses and working to drive social change.

It was a light-bulb moment for Daniel as he realised it was capital they needed, and he was ideally placed to find it.

“It wasn’t a space I had any designs on working in.” Daniel explains, but nonetheless he ended up helping Sally McCutchan with the strategic development of Impact Investing Australia and it cemented him as a leading voice in the space here in Australia.

It didn’t take long for his skills to be recognised; at the end of 2017 he took the reins of IIG where he remains CEO.

Pioneers of the new-economy

IIG is a business, it’s not a charity. They raise money from investors in order to buy and manage a mix of assets and companies; all of which are profitable because they’re looking forward, to the needs of the future. While also solving major challenges with innovative solutions.

He gave us a sneak preview of a new retail fund that will make impact investing accessible to everyday investors.

“Yes I feel very strongly about democratising impact investment, and yes we’re working on some stuff that I think is incredibly exciting, and we’ll enjoy talking about it in the next couple of months.”

And he spoke proudly about the thousands of solar panels they’ve funded as part of The IIG Solar Asset Fund.

But… what about emerging markets?

While IIG don’t invest offshore, Daniel is well aware of the opportunities that exist there. He can see, clearer than most, that giving people access to capital is vital for development.

He went further, to make an important point, that while there is risk in investing in emerging markets – political, liquidity and foreign exchange risk – there is also huge potential for impact.

“If you care about those sorts of outcomes, I think funds like Patamar in emerging markets offer some of the best impact return on investments that you could possibly make.”

The power of a story

This podcast, Good Future, is all about story-telling. In the world of impact investing it’s vital because we’re trying to value something highly subjective. We don’t have the sophisticated accounting systems that finance has developed over many decades. Instead, we have to use story to show the value of making change.

Daniel is a fine raconteur himself;

“Capital is the water in our watering can, and we get to choose which seeds we’re going to water. I believe we should be deliberate about that, we should think about what we want to water, what plants we want to grow? Which ones are going to serve us and our kids?

Story-telling is how we help people to connect to how important that is.”

Financial jargon has long kept the bulk of the population at arm’s length. It’s made it too hard to ask questions, and it’s made exploitation all too easy.

Making investing more accessible is a key mission behind impact investing. And that’s a story worth telling.

“Story-telling helps me get out of my head, and connect to my heart space.  And connect to things that are, most of the time, much more important than just the numbers.”

Daniel recommended some great books this week. Have a read and let us know what you think…

The Purpose of Capital By Jed Emerson

“Capitalism has had some fantastic outcomes in terms of poverty alleviation and economic growth. But it’s also produced a whole range of bad outcomes, including rising inequality and terrible environmental outcomes. So how do we take what’s good about capitalism, and go to version 2.0, where we can produce outcomes that are not just economically good for people, but also within the bounds of our natural environment, and that create and support the type of society we want to live in. Kate Raworth’s book Doughnut Economics is a really good framing for that.”

Our Instagram is pretty great, check it out over HERE

#40 Dave Rae: a responsible investor, and a financial advisor

#11 Jed Emerson: the conscience of impact investing, asking what is the purpose of capital?