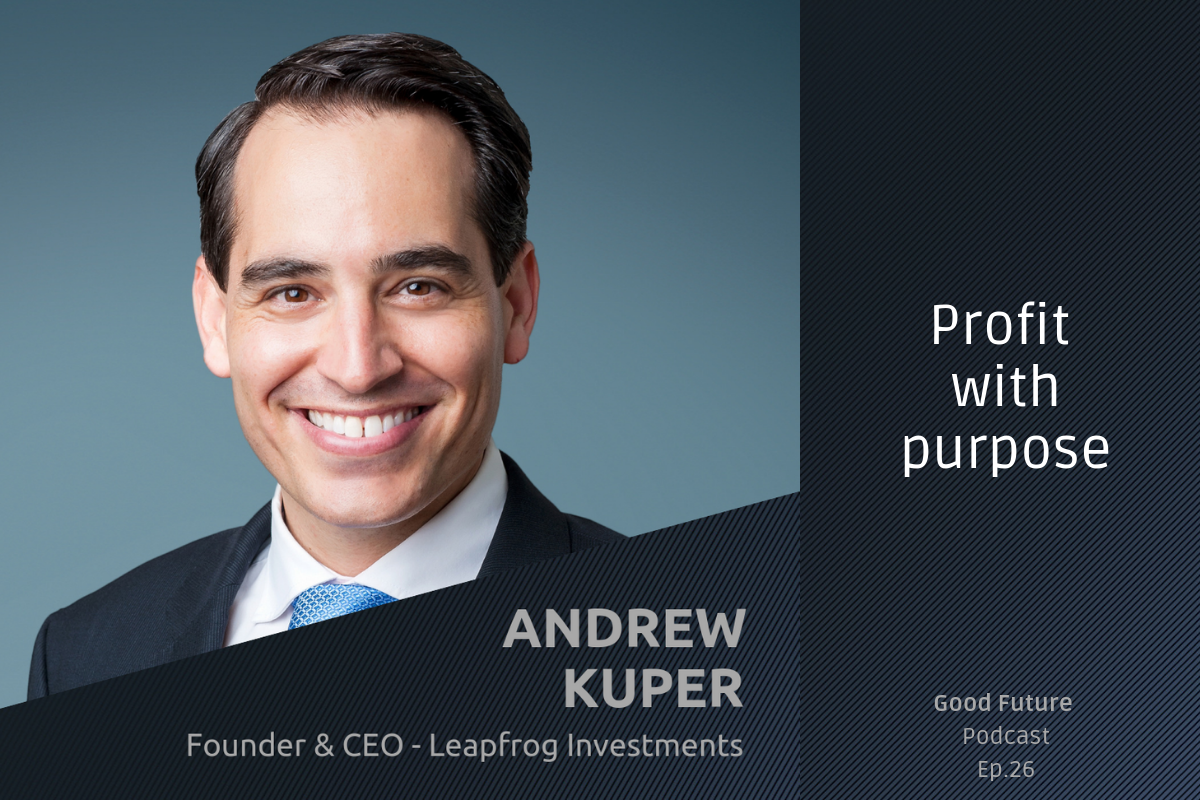 Andrew Kuper is the founder and CEO of Leapfrog Investments, he’s a pioneering impact investor, and he’s long been a hero of mine.

I had a lot of questions: I wanted to go deep on what made his investment approach stand-out from the crowd when so many investors are adopting the impact investing label.

He talked about his record-breaking fund which has raised one billion Australian dollars (that’s billion, with a B!), it’s the world’s biggest impact fund by a dedicated impact investing company, and it’s estimated to impact some 70 million emerging consumers.

Andy explains how he started trading on the share market at age ten, and how his upbringing in South Africa allowed him to identify inequality and exclusion from an early age.

We dig into the genesis of Leapfrog, the company, how it makes its investment decisions, and what makes it different.

Being a true impact investor isn’t about simply providing capital, instead, it’s about building businesses with a purpose – and that takes effort.

Leapfrog invest, but they also shape the management of their portfolio companies. They want them to dominate their markets, because that will maximise the positive impact they’re having on their customers.

The customers (their beneficiaries) come first, and that’s good business.

Jeff Bezos and the Age of Amazon

The House That Jack Ma Built

“What I like about these two books is the clarity that those founders had about what they were trying to achieve and what the measurements were. And every technique and approach and hire and strategy they came up with, was oriented towards that vision, and those values and sense of priorities. I sometime think that is the critical thing in business. To have that kind of orientation to what you’re trying to achieve.

They really designed everything from the customer backwards. I really love those kinds of books that give you that vision.”

Genghis Khan and the making of the modern world

“What I love about that book is it reveals that we have this image in the west that we created the modern world with all the West, Europe that we were the innovators. That we ended torture and we brought human rights to the world. In fact we need to see that the industrial revolution and the enlightenment are only about 250 years old. Human societies have been going on for a lot longer than that.

If you look at Genghis Khan, he was vilified because he beat Europe and China in wars and he outlawed many outrageous things that the West was perfectly comfortable with. Like witch burnings and things like that.

He was excellent at adopting technologies. He introduced meritocracy. That’s why he won wars because he promoted people of the country and societies he conquered. He did a skills analysis and he promoted them into his army and into his management infrastructure. Based on their skills and merit. And when they faced off against countries that promoted based on families, Ghengis khan won.

It’s wonderful to think about the world in that way, with a much broader frame. To see where you can glean insights and take off the glasses other people have given you, where innovation and progress come from. I’m constantly struck by how many innovations from developing countries are relevant for developed countries.

Like in Kenya, M-Pesa, it’s money transfer that happens seamlessly. The vast majority of the population use it. They don’t use banks. They’ve dis-intermediated all the middle-men. My sense is that progress comes from places you don’t expect.

When you read great literature it helps you to see the world in a different light. And to see the perspective through the eyes of outsiders.”

#31 Radek Sali: Culture, purpose and the future of work